Mark - Well there were a lot of reasons, it with the confluence of celestial events that led to Jupiter being in Aries quadrant…naw shit, David Moody asked. Are you kidding me? I was honored that he wanted to include me in the fun.

Greg - Tell me a little bit about your protagonist from Zombie Fallout.  Is it a James Bond type, never in any real danger – always able to get out of trouble and into the leading ladies’ pants?  Or more of the John Rambo type – skilled and deadly but with a heavy cross to bear?  Or perhaps Ripley (Alien) – a strong female who can take charge and kick butt when she needs to?

Mark - Ah Michael Talbot, that poor bastard could get in trouble while he’s sleeping. He’s always in danger and considering it’s a z-poc there is hardly any undressing going on. I consider Mike to have a healthy dose of Obsessive Compulsive Disorder while simultaneously being struck with Attention Deficit Disorder, he wants to finish things he just gets distracted by shiny objects.

Mark - It’s not a good place. I just read Nicholas Sansbury Smith’s Extinction Horizon. Can I answer this question later, I might go read Little House on the Prairie or something.

Mark - Scrappy Doo, I hate that little bastard, was not surprised when he showed up as a bad guy in the movie.

Greg - Where did you get the idea for Z-Hunt, your contribution to the Year of the Zombie?

Mark - Basically came to me from that idiot Dentist from Ohio or someplace that shot the protected lion then shared his kill with the world, fucking putz.

Mark - IT from the master himself Stephen King, I was ten and that book sunk deep the fear of clowns!

Greg  - You’ve got a gang coming over for a BBQ on the 4th of July. Naturally, you wait until 10 minutes before closing on the 3rd to get your meat. All they have left is ground turkey (burgers), lamb chops, or tofu sausages…what do you bring home?

Mark - Tofu should be outlawed and I’m not a fan of lamb, there are great recipes for ground turkey though, make some great chili!

Greg  - If only one of your books was to survive the apocalypse and still be read in a thousand years’ time, which one would you want it to be?

Mark - I guess I’d go with The Spirit Clearing, I think it’s one of my best.

Mark - There are too many to mention, but Stephen King, Dean Koontz, John Christopher, JRR Tolkien, Isaac Asimov and a couple of hundred others.

Mark - My hope is that I can ride it out at my house. We live far enough in the sticks we might be able to pull it off!

When the cash-strapped Reynolds, owners of the Z-Hunt paintball range, are approached by a brilliant yet unscrupulous scientist looking to turn their business into a real life zombie apocalypse, it seems like an offer they can't refuse.

I mean, what could possibly go wrong in a world where zombies are biologically engineered for exotic hunts?

This week's guest is Mark Tufo

Mark Tufo was born in Boston Massachusetts. He attended UMASS Amherst where he obtained a BA and later joined the US Marine Corp. He was stationed in Parris Island SC, Twenty Nine Palms CA and Kaneohe Bay Hawaii. After his tour he went into the Human Resources field with a worldwide financial institution and has gone back to college at CTU to complete his masters.

He has wrote the first installment of the Indian Hill trilogy in college, it sat in his garage until July 2009 when he published it on Kindle. He has since written the Zombie Fallout series and is working on a new zombie book.
He lives in Maine with his wife, three kids and two English bulldogs. 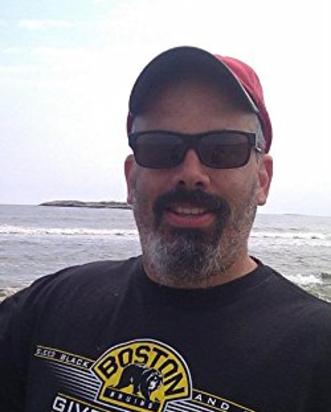