This week's guest is Wayne Simmons 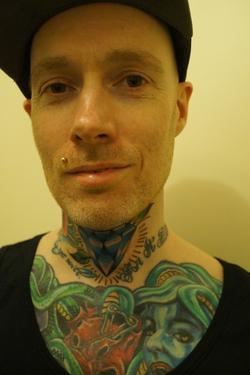 The Office Christmas Party can be a nightmare at the best of times but when it coincides with the end of the world, things get even messier.

For mild-mannered security guard Howard Stanton, this was meant to be an easy shift. A chance to keep his head down and watch Die Hard movies while the rest of the staff get wasted. But then the zombie apocalypse happened and peopled expected him to do something about it. Was that even in his job description?

It's going to be a long drink- and drug-fuelled night. The world's going to hell and it's down to Howard to hold it all together. He's in charge tonight, and if he screws up, it'll be everyone's last Christmas.
​

Belfast born, Wayne Simmons, has loitered with intent around the genre circuit for some years. He penned reviews and interviews for several online zines before publication of his debut novel in 2008.

Wayne's work has since been published in the UK, Austria, Germany, Spain, Turkey and North America. His bestselling zombie novel, FLU, was serialised by Sirius XM's Book Radio.

As well as writing fiction, Wayne is a regular contributor to Skin Deep Tattoo Magazine and PR/ Marketing chief for Infected Books. In 2013 and 2014, Wayne co-produced the popular Scardiff Horror Expo.

Wayne now lives in Wales with his ghoulfiend and their Jack Russel terrier, Dita. Look out for him at various genre, music and tattoo events or visit him online: www.waynesimmons.org

Greg – Which authors have been the greatest influence on your writing?

Wayne - I’d say Stephen King, for sure. He was the first writer I really connected with as a kid and I read a lot of his work back then. Now, not so much. Lawrence Block is a writer I connect with now. Such a lean, uncluttered style with perfectly drawn characters. His Scudder series is hands-down the best writing out there.

Greg  - You have been tasked with eliminating one of these from the collective human consciousness: King, Lovecraft or Stoker.  Which one would it be?

Wayne - Lovecraft without a doubt. I don’t get the hype, I really don’t. I hate overwritten, verbose writing and Lovecraft is a repeat offender in that case, alone. I’m not big on so-called classic writers, they mostly bore me. Stoker gets a by-ball because Dracula is such an awesome story that even the iffy writing doesn’t detract from it.

Wayne - I’d go with CJ from the Dawn of the Dead remake. Love that guy! Such a brilliant anti-hero, made that film for me.

Greg  – You’ve written by yourself (Flu, The Girl in the Basement, etc.) and you have also co-written some books (Voodoo Child and now Last Christmas).  What is the biggest adjustment you have to make when coauthoring a book?

Wayne - I’d say not being precious is important. You know the saying ‘murder your darlings’, well co-writing needs you to be open to other people murdering your darlings. It helps, of course, that I go back a long time with both Andre and Dave, over a decade with both of those fellas. They’re very good friends, very easy-going guys, so I’m not ‘getting to know them’ while working on a piece. I honestly can say both those books were a joy to work on because I was working with those guys, much more so than if I was to have written them alone. I learned a lot from their ways of doing stuff and would jump at the chance to do more work with either of them.

Greg  - What will your family be having for Christmas dinner?

Wayne - We haven’t decided yet but I’m guessing the staples will all be there – potato, Brussel Sprouts, carrot &  parsnip and gravy. My partner and I are vegan so we’ll have some veggie pie or something instead of turkey. And chocolate. There will be much, much chocolate consumed!

Greg  - When you kick back and relax with a good book, what are you reading?

Wayne - At the moment, I’m on a bit of Star Wars blitz. I’m literally eating up all the new canon tie-in novels and enjoying the hell out of them. I’m also a big noir fan, the old-school American stuff from the 40s, 50s and 60s, love all the Hard Case Crime releases. To be honest, I rarely read any horror these days. More into sci-fi and crime.

Greg - Tell me a little bit about your protagonist from Last Christmas.  Is it a James Bond type, never in any real danger – always able to get out of trouble and into the leading ladies’ pants?  Or more of the John Rambo type – skilled and deadly but with a heavy cross to bear?  Or perhaps Ripley (Alien) – a strong female who can take charge and kick butt when she needs to?

Wayne - None of the above! Our boy Howard is an insecure security guard (excuse the pub!) working for fictional mega-corp, Kaplan Industries. Any heroics are reluctant at best, even accidental. LAST CHRISTMAS is very much comedy horror at heart and was a lot of fun to write.

Greg  - Who is your favorite Scooby Doo monster?

Wayne - I really couldn’t name one. People hate Scrappy, don’t they? I always found him funny, though. His unwavering admiration for Uncle Scooby, despite all that evidence to the contrary, is endearing. KISS did a Scooby Doo film recently, didn’t they? Can they be my favourite monsters?

Greg  - Where did you get the idea for Voodoo Child?

Wayne - From a lifetime watching 70s and 80s slasher films. Andre and I are big fans of that genre and time period of horror film and we really wanted to recreate it on the page, putting our own spin on it. It hasn’t sold the best but I’m very pleased with that book and what we did with it.

Greg  - Do you have a plan for the apocalypse, or will you just wing it?

Wayne - I’ll wing it, for sure. I think Moody’s plan is pretty sound on this one, though – looking to see where the masses are heading and going the opposite direction.