David Moody grew up on a diet of trashy horror and pulp science fiction. He worked as a bank manager before giving up the day job to write about the end of the world for a living. He has written a number of horror novels, including AUTUMN, which has been downloaded more than half a million times since publication in 2001 and spawned a series of sequels and a movie starring Dexter Fletcher and David Carradine. Film rights to HATER were snapped up by Guillermo del Toro (Hellboy, Pan's Labyrinth, Pacific Rim) and Mark Johnson (Breaking Bad). Moody lives with his wife and a houseful of daughters and stepdaughters, which may explain his pre-occupation with Armageddon. Find out more about Moody at www.davidmoody.net and

The Office Christmas Party can be a nightmare at the best of times but when it coincides with the end of the world, things get even messier.

For mild-mannered security guard Howard Stanton, this was meant to be an easy shift. A chance to keep his head down and watch Die Hard movies while the rest of the staff get wasted. But then the zombie apocalypse happened and peopled expected him to do something about it. Was that even in his job description?

It's going to be a long drink- and drug-fuelled night. The world's going to hell and it's down to Howard to hold it all together. He's in charge tonight, and if he screws up, it'll be everyone's last Christmas.

This week's guest is David Moody 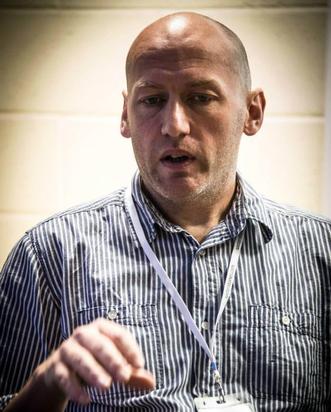 Greg - David, I have had only a couple of moments where I’ve actually dropped my Kindle on my lap and said “I can’t believe he just did that?!” The first time was when the Knight’s Guard turned on John Snow like he was Julius Caesar. The second was when I was reading Isolation in 2014, “In fact, this is going to be my last word on zombies for the foreseeable future.” Now two years later, we have the Year of the Zombie and One of Us Will Be Dead by Morning on the way.  Why the change of heart?

David - I genuinely meant it at the time! I just thought it was time for me to write something different, and in the same way actors don’t like to be typecast, I don’t want to be thought of as ‘that zombie guy’. Problem is, I just can’t get enough of the living dead (that sentence sounds all kinds of wrong!). I’ve a lot of non-zombie projects in development, but I keep coming back to zombies. And from a business perspective, I know I have a large audience of zombie fans. Year of the Zombie came about because I knew I was going to have a quiet year in terms of my personal releases, and 2016 also marked the fifteenth anniversary of the release of the first Autumn novel. I thought the project would be a great opportunity to mark that anniversary and do something to grow the reach of Infected Books. It’s been a lot of hard work, but I’m very proud of the results. We put out a series of excellent stories, all very different, and I think they really show what the zombie genre is capable of. It’s not just brain eating and gruesome death scenes (though there is a lot of that, of course!). Hater IV (and V and VI) came about because there’s been a lot of movement on the screen adaptation of Hater over the last couple of years. I was talking to Ed Barratt, the producer of the planned movie, and we started brainstorming ideas to expand the story beyond the original three novels. The new books are the result of those discussions. They wrap around the original trilogy and tell a second complete character’s story which, when read in tandem to the first three books, will give the reader a unique insight into a world turning itself apart. Oh, and I have another zombie project coming up in early 2017! The Front: Red Devils will be released in February. It’s the second book in a series I’m writing alongside Tim Long and Craig DiLouie. It’s the brainchild of those two chaps, and I’m very excited to be involved.

Greg - I think that this has to be the foremost question on my mind (it’s actually two questions). Do you have an anticipated release date for the Hater movie? Will it be released in North America?

David - I have to be very careful how I answer this. There’s been a huge amount of movement on the project over the last few months, and the ink’s still wet on some important paperwork which should see the book reaching the screen very, very soon. I don’t have a release date, but given the size of the production company involved, I’m confident it’ll be seen right around the world. I wish I could say more, but I can’t. One little tease... the screen you see it on might not be as big as you’d expect (ie you might be able to stay at home to watch it!).

Greg - How did you go about selecting the line-up for the Year of the Zombie?

David - Good question! As you might expect with a project like this, the original line-up and the final line-up changed quite substantially. Some people wanted to be involved but couldn’t commit, others committed but then couldn’t deliver... it was a moving feast from day one! Wayne and I had a dream team we pitched the idea to, and we took it from there. It’s a mix of big-hitters and new writers, with a broad range of styles and interests. Honestly, I couldn’t be happier with the end result. We’re going to release the stories in print next year, so the Year of the Zombie’s not quite over just yet.

Greg - My wife and I will often talk about who could play which character in the books that we read. We have talked about Hater, she says that Danny McCoyne has to be played by a new / unknown actor.  I agree, but I have him pictured as the love child of Simon Pegg and Cillian Murphy. I can only image, as his creator, you have your own idea of who should play Danny McCoyne.  Did you have any input on the casting? Are you able to tell us who gets the starring role?

David - Your wife is a wise woman! I’ve been asked this question a lot, and my answer has always been exactly that – Danny McCoyne should be played by a newcomer. I think it’s key to the story that the audience just see him as an everyman – the bloke next door – rather than a film star or ‘that guy from that movie or that TV show...’ BUT – you are a wise man too, because I actually sent Simon Pegg a copy of the book a while back because I thought he’d be great. Hater has a streak of dark humour running right through the middle of it, and I thought it would have a great impact to have a comedic actor like Pegg playing such a dark role. I think Cillian Murphy’s great, but I’d just be thinking ‘what’s that guy from 28 Days Later doing in Hater?’

Greg – I have noticed a trend of authors collaborating on books, like you did with Wayne Simmons on Last Christmas. What are the advantages and challenges of this kind of venture versus working solo?

David - I’ve always been instinctively opposed to collaborating. I like writing because I like the isolation and control – as an author you’re in complete control of the world you create (apologies if that sounds pretentious). However, when I do let my guard down – which is how it feels – and work with other authors and editors, I always have an absolute blast. While I have a very definite idea how I want a story to go, other folks will suggest changes or different directions which can open up huge possibilities. Wayne and I go back many years and we know each other well and share a lot of the same influences etc. Our writing styles are similarly stripped back and it was a joy writing Last Christmas with him.

Greg – What will the Moodys be enjoying for Christmas dinner?

David - A very traditional turkey with all the trimmings, followed by a very non-traditional Christmas break. We’re off to a family event on the other side of the world, so Christmas is going to be very different for us this year!

Greg – You have talked about the difference in lead times between indie publishers and traditional publishers.  You straddle the line between the two. What other major differences are there?

David - The main difference is control. With independent publishing, you have complete control – complete autonomy if you want it. With mainstream publishing, you’re a cog in a much larger machine. That can be both a blessing and curse (see answer 5!). I think the other difference is marketing and bookstore representation. Indie publishers are severely limited in this regard, whereas traditionally published books are more likely to end up in bricks and mortar bookstores. As a hybrid author, I’ve historically benefitted from that. My traditional releases have been given large amounts of publicity by the publisher, and my indie releases have benefitted as a result.

Greg – If you found yourself in the Hater world, how long would you survive?

David - Probably not as long as I’d like to think I would! My end of the world survival scenario is very boring, and definitely wouldn’t make a good book or film. It goes like this:

1. check what everyone else is doing

Greg – Stephen King has often had a small cameo in the movies made from his books.  If you could have a cameo in the Hater movie, which part would you want?

David - A vicious killer. It would have to be, wouldn’t it! I actually had a cameo in the Autumn movie which was released in 2009. I played a zombie, and actually ended up on the DVD cover around the world. It wasn’t a great film, but playing zombie with Dexter Fletcher at 3am in the morning in snowy Canada was incredible!

Greg – What does the future hold for your writing?  Will you continue on with more zombies or do you have some plans for something completely different?

David - Both. I’ve tried to step away from zombies, but they keep pulling me back. I have a book called The Front: Red Devils coming out in February (World War II zombies – part of a series written by Craig DiLouie and Tim Long), then the first book in a new Hater trilogy out in August. It has the snappy title ‘One of Us Will be Dead by Morning’. Thereafter I’ve got lots of projects in development – it’s just a case of finding time to write them all!

Thanks Greg, and particular thanks also for your support of the Year of the Zombie!