Rich Hawkins hails from deep in the West Country, where a childhood of science fiction and horror films set him on the path to writing his own stories. He credits his love of horror and all things weird to his first viewing of John Carpenter's THE THING. His debut novel THE LAST PLAGUE was nominated for a British Fantasy Award for Best Horror Novel in 2015. The sequel, THE LAST OUTPOST, was released in the autumn of 2015. The final novel in the trilogy, THE LAST SOLDIER, was released in March 2016. 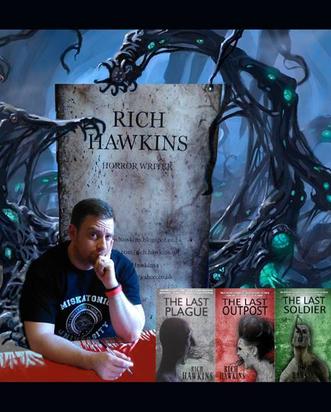 Following the devastating outbreak of an alien virus, Eddie and his young grandson struggle to survive within the wasteland of Great Britain. They live day-to-day, scavenging among the ruins, trying to avoid the deadly infected that now roam the land. But Eddie has other demons to conquer: a longstanding drink problem that needs to be kept in check if he wants to keep both himself and his young charge alive.

When a stranger enters their lives, seeking help, Eddie is forced to make a choice that could alter their lives forever.

This week's guest is Rich Hawkins

Rich - I was invited by David Moody, the boss of Infected books, one of my favourite writers and a master of apocalyptic horror – how could I say no? Plus it’s a great line up of writers, a cool project, and I got to write about infected abominations, so I would have been a fool not to take part!

Greg - Tell me a little bit about your protagonist from The Plague Winter.  Is it a James Bond type, never in any real danger – always able to get out of trouble and into the leading ladies’ pants?  Or more of the John Rambo type – skilled and deadly but with a heavy cross to bear?  Or perhaps Ripley (Alien) – a strong female who can take charge and kick butt when she needs to?

Rich - The main character in The Plague Winter is an old man called Eddie, who is struggling to protect his grandson in the aftermath of the Plague’s outbreak. He’s a complicated man battling the demons of alcoholism whilst trying to keep himself and his grandson alive. He has no special skills or super powers, just the desire to survive; but the burden of his addiction and the heavy weight of his conscience both attempt to bring him down. He’s damaged and traumatised, and slowly losing what little hope is left. But he loves his grandson and would give his life to protect him. I like to write about normal people in horribly extraordinary circumstances.

Rich - We’ve got Ham Hill Country Park about twelve miles away from us. The Hill itself once supported an Iron Age fort, which was captured by the Romans. It’s quite a cool place. There’s a pub there, too, which helps…

Rich - When I was about four or five, I think – my family had this horrid puppet/doll thing which looked like a little boy and was about half the size of a real one. It had blonde hair like I did back then. And a snappy mouth and stubby fingers. I’ll never forget its glassy, staring eyes.

Rich - My favourite horror movie is John Carpenter’s The Thing – it’s a masterpiece and still as unnerving as it was when I first watched it on VHS. The ‘resuscitation’ scene still gets me…

Greg - Where did you get the idea for The Plague Winter?

Rich - It just popped up in my head, one day, and it wouldn’t go away. One of those ideas that demands to be written.

Rich - The Mummy of Anka. Scary. But I was always disappointed that the monsters always ended up as some dude in a costume. They could have had a ‘real’ monster just once, right?

Rich - I plan to just wing it. The chances are I would die pretty soon anyway, so I may as well have fun while the world burns. I’d grab a cricket bat and a few blocks of cheese then go out into the wastelands to meet my doom.