21st Century horror is currently a thriving scene. Whilst the

literature has become a ghost town, haunted by the spectre of

Stephen King, its lack of commercial acceptability has only

To represent the current horror scene with 5 books confronted

me with a tough choice, and in taking the decisions I have, I

have certainly left out sub-genres that are equally as popular.

mentioned here, but the ones in my selection are those that

appear most prominent in my reading.

So with my disclaimer aside in case I’ve offending anyone with omission, let’s descend the shadowy path into the murky depths of 21st century horror literature…

Extreme Horror is a very big movement at the moment, with a growing fan base of people

that want to be pushed as far as they can read. What makes for an extreme horror novel is

something exactly hard to quantify, but when your toes start curling, your stomach gurgles

Matt Shaw has certainly made himself one of the kings of this new playground, and with

Michael Bray adding even more nastiness, Monster is to me a quintessential purchase for

anyone wanting to understand this subgenre more.

The story has only a handful of characters and a handful of locations, yet the tension that is created within this book is incredible. When the nastiness arrives, it proves to be brutal, with the flashback sequences being by far the hardest to stomach. But what sets this apart from the many poor imitators is the intellect behind it.

As you read the book you are forced to change your perspective and allegiance to characters until you are left in an emotional quandary.

This is extreme, but with a taut, fast paced storyline that yields a dark sensitivity and intelligence.

If you want to find a starting place with extreme horror then look no further than here.

As the disillusionment of the 21st century being nothing but ‘more of the same’ set in,

people craved for a new world. To tear it all up and start again. The appeal of the

post-zombie outbreak hit the zeitgeist, helped along its way by the release of both Shaun Of

The Dead and the Dawn Of The Dead remake.

Zombies were suddenly everywhere. In films, in books, in computer games; you just

couldn’t stop the horde from rising. Like any fad, it was expected for the craze to run its

course, but with the emergence of The Walking Dead TV Series, more life was breathed into

This popularity has continued though the literary buying world too, and despite horror websites often stating posts like ‘we don’t review zombie novels’, authors have carried on undeterred.

Duncan P Bradshaw’s debut novel, Class Three shows us the progression of the zombie into a post modern and self aware sub-genre. The hero of the book has been collecting zombie films for years, and is ecstatic when the outbreak finally appears. Armed to the teeth with knowledge of his favourite brain chompers, gleaned from countless Romero marathons, he guides a band of survivors through this new world as they try to find safety.

Class Three explores so many different angles of the apocalypse, looking at rising death cults, deranged psychos, human drama and even writes some of its chapters from the view point of a zombie.

What makes this zombie tale stand out from the rest is the unique blend of comedy and horror. Neither is toned down and so you will find yourself laughing and grimacing in the same paragraph. It’s a rollercoaster ride with fully formed characters and great action set pieces.

It’s a rare book for a debut to appear this fully formed.

HP Lovecraft may have died in 1937, but his influence has never been as prevalent in

horror as it currently is today. There are countless anthologies appearing from small

presses taking a different slant on the elder gods of the cosmos; Cthulhu in Roman times,

Cthulhu vs Shakespeare, Cthulhu Lies Dreaming, and so on.

or Daniel Marc Chant’s Maldicion, will testify to this.

To illustrate this sub-genre in my list of five books, I would plump for William Meikle’s

The Dunfield Terror. Meikle is a master story teller and superb writer. This book shows

his lyrical prose and makes for an interesting take on the Lovecraft theme; providing originality within his cosmic offering. The book veers between two timelines, as the mysterious and unexplainable entity and its discovery is described. The two timelines eventually connect, but I’m not going to tell you much more than that for fear of ruining it.

This book’s prose oozes quality from the very start. A masterclass in storytelling that deserves the praise it receives and a much wider audience.

With the horror world driven underground, the authors writing in it have been left to

explore their own passions and influences. One of those passions is something that hasn’t

been seen outside of a second hand bookshop in decades: Pulp Horror.

grubby book that was passed from friend to friend in the playground at school. These books

extending into the 1990s). A time when titles by Guy N Smith and Shaun Hutson could be

These books have long since disappeared from book stores, and when there’s a vacuum, someone will fill it. Those authors (people like David Owain Hughes and Adam Cesare) have proven there is still a market hungry for these kinds of books.

Benedict J Jones’ Slaughter Beach is a perfect example of the style homaging pulp’s golden era; the book is even set in the 1970s! The plot revolves around a group that land on a remote tropical island to film a photoshoot. However an evil lurks within this paradise…

This book is wonderfully paced, starting at 100 mph and never slowing down until the blood-soaked climax. Within the first few chapters we are already treated to drug use, sex and beautiful locations. And that’s before the killing starts.

This really hits the mark for me, and I’m not alone in thinking so. A lot of people were raised on this kind of horror, and its returned is favourably welcomed.

For my last entry I’m going to pick an anthology. The Black Room Manuscripts series

provides some fantastic stories, cutting across the horror spectrum. Due to its lack of a

they like. The one common strand is that it is all quality.

I was torn between selecting volume one or two, but decided to go for the second one.

The first does hold a few trump cards in its deck, such as sci fi horror and having horror

as well as featuring outstanding pieces from newcomers like Ian Caldwell and Vincent Hunt.

But volume two just wins it for me. Maybe partly because I curated it and therefore have a

personal attachment to it. But I think largely it is because of all the elements inside.

It features two authors from the past that are still writing today (Shaun Hutson and Graham Masterton), giving us an indication of their longevity.

The styles and themes are so varied that you’ll be disgusted by one story, brought close to tears by the next, then belly laughing on the third. Its selection even makes you ponder, what exactly is horror?

Not only are you presented with a raft of talent on their A-Game, displaying all the wide varieties of horror that are being written at the moment, it shows one last and very important thing about 21st century.

All the authors in this book gave their time and talent for free to help raise money for Alzheimer’s Research. They didn’t have to, but they did. So what this book finally demonstrates, is that within this scene that has been commercially ignored and sent back to the underground, away from the spotlight of the mainstream press, something has indeed been growing. But it’s not really a monster, it is the most important thing of all. Something that may looked back on in decades to come with cherished memories. That is a community. 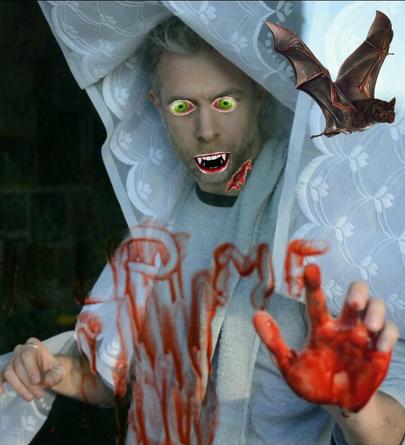 J. R. Park is an author of horror fiction and co-founder of the Sinister Horror Company. His inspiration is drawn from misheard conversations, semi-sleep states and a compulsion to inflict the world with the demons inside his head.

He has currently released four novellas: Terror Byte, Punch, Upon Waking and most recently The Exchange, as well as appearing in a number of different short story anthologies and curating The Black Room Manuscripts Volume Two.

He currently lives on the outskirts of Bristol, UK, and one day they might let him in.

Thank you for contacting us! If needed, you will hear back within 48-72 hours.
View on Mobile