If there would be anything great about the 2052 crash of

the internet as envisioned by Greg, for many it would be

the fact that much of the horror fiction would disappear

off the face of the earth. Since its beginnings in the 18th

century, the genre has been seen as an unfortunate flaw

in the otherwise noble art of literature.

works of horror fiction would survive in print and that,

by some strange coincidence, all other books in all other

genres would have spontaneously combusted!

My list would probably be slightly different every day

but here’s the one for today.

to come. Set in 1937, Dark Matter is a story about an Arctic expedition that is faced with a

ghost. As a Finn, I strongly relate to the bleak, wintery darkness in which the story takes

place and to me that’s at least half the magic of this novel. I read Dark Matter during the

get from horror stories nowadays. And apart from the scares, Dark Matter is also a

over and around us in the universe.

Ramsey Campbell is a tricky author for me. I’ve enjoyed all of his novels, but none of them

have really blown me away. Still I consider him one of the greatest writers of horror fiction

and certainly a big personal influence. In a way, Holes for Faces solves the paradox by

showing Campbell at the peak of his craft as a writer of short stories. What I’ve always

admired about him is his ability to make the everyday seem genuinely scary. In this

collection, the best and most unsettling stories are told from the viewpoint of children or

elderly people. Just read The Decorations or Peep or Chucky Comes to Liverpool and you

know you’re in the hands of a genius. Campbell is at the same time a pure genre writer and

a brilliant psychological realist, right up there with Alice Munro, Ian McEwan and the rest.

After The Walking Dead and all its literary equivalents, Bennett Sims’ novel goes head

on to the philosophy of zombies. So if you’re into exploding heads and guts being ripped

out by a hungry horde, this is probably not for you. But if you’re a bit tired of all that and

still find the idea of the dead walking around fascinating, A Questionable Shape might be

just what you’re looking for (the title is from Shakespeare: Hamlet addresses the ghost of

his father by calling it “a questionable shape”). Sims approaches the subject at turn very

concretely. He discusses the possible biology of zombies and especially their eyes. How

does the world look through the eyes of the undead? On another level, the zombie

epidemic is a way to tackle the very basic questions of being human. Are we also

automatons drawn by our most basic urges and, on the other hand, by our nostalgia for

the people and places that were meaningful to us long time ago? A Questionable Shape might be a bit of a heavy read for some, but if you ever read David Foster Wallace and wondered how it would be with zombies, this is for you.

African horror? Nigerian born Nuzo Onoh (now living in the UK) has been speaking for the

African genre literature, and her collection The Reluctant Dead shows that it not only exists

but is very much alive indeed. Onoh’s stories are a combination of sinister folk tales, social

realism, revengeful ghosts and dark humour that will make you laugh out loud when you’re

not shocked and appalled by the sheer grotesqueness of what’s going on. Strangely enough

and despite the cultural differences, Onoh sometimes reminds me of the Swedish horror

(unfortunately Fager hasn’t been translated into English which is a loss for you people!). In

The Reluctant Dead, the overarching theme is revenge and Onoh definitely has fun with it!

Thomas Ligotti: Songs of a Dead Dreamer and Grimscribe (foreword by Jeff VanderMeer)

This is where it gets really dark and really personal at the same time. For me,

darker aspects of life. Where a lot of horror fiction deals with the fear of (very improbable)

violence and (even more improbable) encounters with monsters, Ligotti takes you to the

existential limit and the heart of what makes the genre tick. He really makes you feel the

side-show and everything is always already lost. No heroic boast of a Nietzsche or the

decadent rebellion of a Baudelaire or Milton’s Satan. Even Ligotti’s style is cold and

indifferent, like the hum of planets. So a word of warning: If you start getting into Ligotti,

you’ll find yourself in a very, very dark place. Then it’s up to you to decide whether to find

some new meaning in your life or be left there in the dark. I found my way out. You’ll have to find yours.

Marko Hautala’s unique blend of psychological horror and realism has attracted readers of all genres, earning him a reputation as the Finnish Stephen King. His first novel, Itsevalaisevat (The Self-Illuminated Ones), received the Tiiliskivi Prize, and Käärinliinat (Shrouds) received the Kalevi Jäntti Literary Prize for young authors in 2010. Unikoira (Seeing Eyes) was nominated for the Young Aleksis Kivi Prize in 2013. 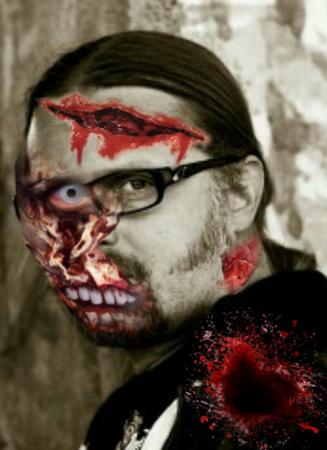