What five books represent horror in the early 21st century?

I’m going to cheat with my first book because, as far as I know

it hasn’t been written. Not yet, anyway. But it should be.

age in horror, in part brought on through the onset of

Who would have believed that in an age of celebrity gossip

and reality TV shows, (where Andy Warhol’s famous line that

everyone can be famous for fifteen minutes has never been

truer,) that we would see a proliferation of  zombies, vampires,

serial killers and some of the sickest storylines and concepts I

can ever remember seeing presented to us for our reading

Jeff Bezos may be the pantomime villain of the internet age, but in reality he is our savior. Because without his democratization of the publishing process through the Kindle Direct Publishing platform, who knows if horror would ever have had its current renaissance?

But KDP isn’t the only reason for a proliferation of new horror entertainment. There is something else going on.

enough to get an ARC of this book, but I can tell you there were times when I wished I

hadn’t. Not that it was a struggle to read (oh hang on a minute, yes it was) but because it

has to be one of the bleakest, darkest books I have ever read. The story is simple: a father

goes looking for his daughter who was snatched from his front garden some years ago. And

all the while catastrophic changes in our climate are wreaking havoc with our lives, our

capsule and preserve it for future generations who might, just possibly, survive the

approaching cataclysm. As a reminder of man’s stupidity in the 21st century when it came to looking after the planet, this is far more compelling than any propaganda the Green Party have trotted out.
And, yes, it is a fantastic read too.

Whilst the internet has brought us delights galore, (the freedom to create and publish,

new modes of communication, Amazon Prime and cat memes) let’s not forget it has a dark

And Joe Hill caught that horror perfectly in his novel, Heart Shaped Box.

Yes, I know, instead of throwing all your old shit out you can now list it on eBay and sell it

all for a small fortune. At least that was the promise anyway. What’s really happened is that

nobody wants your shit. Instead, all that other stuff that you want from legitimate sellers gets bought up by sleazy scumbags who then go on to list it at a fantastically inflated price on eBay. So you end up buying it anyway because you can’t get it anywhere else, and still none of your shit sells, and you wind up even poorer than you were before.

Okay, rant over. Now where was I?

Oh yes, online auction sites. Well, despite my unfortunate experiences with eBay, etc, at least I have never bought myself a ghost. Sounds cool, doesn’t it? I mean, who wouldn’t turn down the chance to own your very own ghost? Especially if it came at a rock bottom price from a five star rated eBay seller?

But then you have to live with the ghost, and that’s where the horror truly starts. Especially when you find out that the seller has a no returns policy, and that no one else wants to buy it.
Just like all your other shit.

Next up, Justin Cronin’s The Passage. How I loved/hated/kind of liked this book when I

read it. For me, and many other reviewers, The Passage is a book of three thirds. There is

the first, taut, tension filled third, and then there is the middle section. And like most middle

aged men’s middle sections, it is flabby, unattractive and could do with some trimming back.

Although Justin Cronin never claws his way back from here, the book does pick up again in

the final third, delivering some promise for the second book in the series.

If I wasn’t that impressed with The Passage, then why have I included it here? Because it’s

the end of the world, that’s why.

In the early years of the 21st century we quickly came to realise that the environment was turning on us with a vengeance, the internet was as much a curse as a blessing, and that even serious, literary novelists felt obliged to inform us that the world was about to end in more horrific ways than we could ever imagine. It couldn’t get any worse. Or could it?

Well, as it turned out, no, it couldn’t. Because we were already living in the most horrific nightmare we could ever have conceived.

From the Big Brother House, through Bear Island, the X Factor, Love Island (what is it about reality TV and islands?) I’m a Celebrity Get Me Out of Here, and countless others we suddenly found ourselves surrounded by cheaply produced entertainment about ‘real people’ trapped in a bubble.

So, naturally, Stephen King wrote a book about it.

Under the Dome is, for me, one of King’s least impressive books. A bit of a plodder. And,

although it was nominally a story about aliens, about small town life and its corruption,

about survival, isn’t it really a satire about the end of the world brought about by Reality TV?

penis, and self-aware beyond the point of paranoia and neurosis.

And that is the true horror of the 21st century, my friends, as chronicled by its master storyteller.

Welcome to the end of the world, baby. It’s a laugh a minute.

Ken Preston lives in the West Midlands on the street where Jack the Ripper was born, with his wife, two sons, and their two cats.

Trained in Fine Art, he intended to spend his life starving for his art whilst producing future masterpieces which would live on long after his death.

A couple of weeks later, once he realised he didn’t like going hungry, he got himself a proper job.

Since then he has worked in the reprographic industry, been a street performer, and a clinical photographer, during which time he saw more dead bodies and body parts than he cares to think about.

Now he sits in his cellar and writes novels, whilst pretending to ignore the cats. 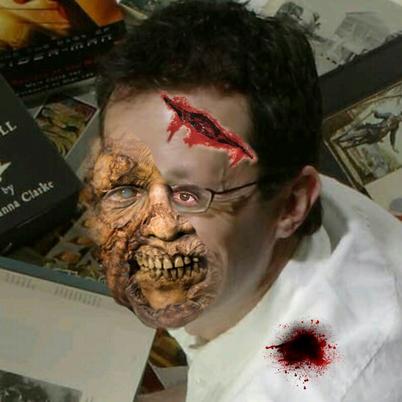