Matthew Weber resides just north of Birmingham, Alabama, with his wife, two young sons, a dog and a lizard. He is author of A Dark & Winding Road (collected fiction), The Bull (a novel), and The Quick & Easy Home DIY Manual (non-fiction). He is owner of Pint Bottle Press and editor-in-chief of Extreme How-To, a home improvement magazine for handymen and DIY'ers. When he isn't writing or remodeling, he plays bass guitar for the punk band Skeptic?. Visit him on the Internet at www.pintbottlepress.com.

This week's guest is Matthew Weber 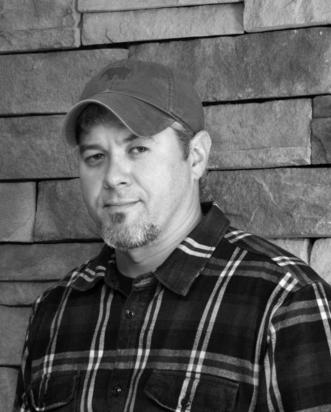 With this collection of short stories, Matthew Weber delivers seven twisted tales from America’s Deep South. From flesh-hungry creatures that lurk in a lake to voodoo curses that change men into monsters, Seven Feet Under delivers spine-tingling suspense and bed-wetting horror.

“To Kill a Guy Twice” pits a vicious ghost against a young boy, his friend and his family.

“In the Hills, The Shadows” shows that your sins can catch up with you, even when you thought you’d gotten away with murder.

And a father will do whatever it takes to save his children from a city-smashing leviathan in “Daddy’s On the Way.”

Fast-paced, frightening and full of shocking twists and turns, this book will force you to stay up late, lock every door, and keep the lights on until the break of dawn.

​Greg - Over time, many books and stories disappear.  If only one story from Seven Feet Under could survive and be studied in five hundred years as an example of early twenty-first century horror, which one would you want it to be?

Matthew - To give the reader the most bang for their buck with a single story, I'd probably choose "Let 'Em Have It" because it contains a few smaller stories woven throughout the central narrative. It was also meant to be a kind of homage to the readers and writers of horror fiction.

Greg - In a short story collection, I’ve always thought that it is essential to grab the reader’s attention and set the pace with the first story.  How did you go about choosing which story to kick off Seven Feet Under?

Matthew - That's something I chewed over for a while, but ultimately the editors at Sinister Grin Press made the decision for me, and I didn't find out the order of stories until I saw the book's TOC. They made a bold choice by opening with "Bad Brunch in the Big Easy" because it's a story that reveals the depths to which some people will sink in the pursuit of self-interest. The story tells a sadly common truth about human nature—and sometimes the truth hurts—but the opener should definitely get the reader's attention.

Matthew - What scares me about dark fiction is not necessarily the page-by-page unfolding of the plot, but instead it's the ideas the story plants, which then fester in your mind after you've finished reading. In that regard, "The Lottery" by Shirley Jackson always stuck with me because of what it suggested about the hidden evils of the seemingly normal everyday people that surround us all. The story works on many levels with several takeaway themes, and that's why it still resonates with people so many years after publication.

Matthew - If that dark day ever were to descend upon us, I'll be wearing a red headband and armed to the teeth right next to my partner John Rambo, and we would lay waste to the undead hordes with the heaviest artillery we could get our hands on.

Matthew - If memory serves, the Phantom Shadows had the coolest look, like hooded reapers that would haunt the nightmares of Scooby-Doo fans and eat their souls.

​Greg - Is your book the type of story that you would allow your own children to read?

Matthew - My oldest son is five and just learning to read, but even when he masters the skill I won't let him read my horror material anytime soon. I don't generally pull punches in my writing, and it definitely features dark themes and violent scenes that are only intended for adults. I'm not exactly sure at what age I'll allow my kids to read it, but the decision will depend largely on their individual levels of maturity.

Greg - You have been tasked with eliminating one of these for the collective human consciousness: King, Lovecraft or Stoker.  Which one would it be?

Matthew - From the standpoint of pure self-interest and crass capitalism, Stephen King would have to go. I love King, but just imagine the newly available shelf space in every bookstore across America if they weren't populated with the works of King. He's such a juggernaut in the market that his absence would reshuffle the whole horror fiction genre and afford more variety of titles from the many other writers trying to get noticed today. However, King's early short-story collections were a direct influence on my writing, so I can't actually envision the world without his contributions.

Matthew - When I was young I had to deal with a bunch of bullies. The maddening thing about being a kid is the limited ways in which you can handle a problem. In the adult world, one generally has the option to avoid people they don't like. Even when faced with a tyrannical co-worker, you can complain to management or ultimately quit the job if you can't get the problem fixed; adults have options.  As a kid, however, if there's a bully in your class that you want to avoid, your mother is still going to send you to school every morning, right where the bully is. It's the law. Kids don't have options, and I remember the terror I felt on those trips to school because I knew I'd be thrown to the wolves.

As I got older, I got meaner, though, and I no longer let people push me around. And to this day I kill a lot of bullies in my stories, and in a many very brutal ways.

Matthew - I'll be mostly winging it. But I'll go down swinging.