Fatebreaker, Book I: A Pact of Lies

In a medieval-era world of great men and new

nations rising from the ashes of a fallen

empire, Raven is a talented pain in the ass. A

cynical, arrogant thief and fleecer, he has a

dagger and lockpick up his sleeve and a

comeback on his lips. He was once the

younger brother of a boy who was prophesied

to be an invincible warrior, and who was

killed for that mistaken belief. Now he has

only venom for causes and talk of destiny,

happy to be a successful nobody. But when a mysterious job goes bad, he finds that the secrets he holds are vital to the coming war between the republic of High Iyanor and the necromantic dominion of Kishoria.

He is captured and coerced by an Iyan captain into guiding an expedition to find a long-forgotten weapon before the Kishorians can reach it. He joins a team of soldiers and mages, and if the danger were not enough, his party includes not only another fated young warrior but a member of the jotunn race that killed his brother. Bitterly, he leads them beneath the Temple Among Worlds, and they fight through barbaric goblins and cosmic monstrosities, navigate dark mazes, and sabotage horrific traps. Raven is distrusted, but only he knows that he has been courted by the Kishorians with a promise: betray the Iyans, and walk away wealthy.

When plans fail, heroes fall, and deadly secrets are revealed, Raven’s cynicism and self-interest is tested by the valor of his companions. He might lead his allies to ruin… or he might use his dark reputation to lure his enemies into his most daring con yet.

This week's guest is Matthew Siegard

Matthew Siegard lives in Gainesville, Florida with his beautiful fiancé, who encouraged him to finally stop editing and take a go at publishing. He works as an analyst during the day, and saves writing about sword and sorcery for after hours (mostly). He reads a great deal of historical non-fiction, along with classic and contemporary genre authors such as JRR Tolkien, HG Wells, George RR Martin, and his favorite, Jules Verne.

Matthew currently organizes the Gainesville Fiction Writers group in his hometown, facilitating discussion of writing approaches and tough critique of each other's work. He's happy to write in any genre, but is focusing now on epic fantasy, although the closest he has ever come to actual medieval warfare was fainting while learning about 19th century surgical techniques in a Civil War fortress.

Greg - Matthew, tell me a little bit about your protagonist.  Is it a James Bond type, never in any real danger – always able to get out of trouble and into the leading ladies pants?  Or more of the John Rambo type – skilled and deadly but with a heavy cross to bear?  Or perhaps Ripley (Alien) – a strong female who can take charge and kick butt when she needs to?

Matthew - Think Indiana Jones with a touch of Blackadder. He’s a thief and con artist who goes by the name Raven, which is theatrical, but that suits how he thinks of himself: dark and dangerous. He bounces around the known world, gaining knowledge and experience, trying his hand at robbing graves or fleecing someone wealthier and even more arrogant than he is.

He’s the kind of guy who thinks himself practical and cynical, but when he winds up on wildly dangerous jobs for relatively low rewards, he doesn’t seem to acknowledge that he’s there by choice. Maybe he has a bit of a death wish, or maybe he’s just easily bored and can’t resist a challenge. He’s smart, but sometimes not as much as he thinks he is, and he’s out for himself.

Still, he has a soft spot for those who grant him more respect than deep-down he knows he deserves. For most others, he is condescending at best.

Matthew - 1984. The idea of having to live your life under constant scrutiny, and surrounded by people who were all potentially your enemies, is something that’s stuck with me. I’ve actually worked some of that feeling into some of the factions in the Fatebreaker series.

Greg - Where did you get the idea for your story?

Matthew - I wanted to write a sword-and-sorcery story where the protagonist is not necessarily a hero, but is willing and able to do things that are necessary and which a traditional hero cannot stomach. Raven is not the mightiest character in the story or one with a particular gift or heritage. But he sees opportunities that others don’t. Unfortunately for the other characters, a lot of those opportunities might benefit only him.

Matthew - I like all sorts of things, though I don’t have as much time for them as I used to with work and writing on my own time. I think Michael Crichton was always my favorite for relaxing reading. The stories were formulaic, but I’d always get from them a new insight into how the world works. Steven Pressfield’s historical novels are great too.

Matthew - Sammy Hagar. I like them both, but a song ranting against the speed limit is a national treasure. It has one of those great ‘80s music videos too, the kind with production values equivalent to Smosh skits these days.

Matthew - It’s hard for me to pin down, but maybe Jim Butcher, because his books manage to be both breezily fun and very intense when he wants them to be, and that’s the tone I wanted to strike with this novel.

Matthew - That would be medieval-era eastern Europe, from some historical books I’m reading to get ideas for future novels. I get a lot of ideas by starting from real history, and then putting on a fantasy spin.

Greg - What is the biggest challenge as an independent author?

Matthew - I’m just getting started, but I think so far it’s finding the time to do all the marketing on your own. But it’s rewarding as long as you get feedback from people—positive or negative, as long as they’re interested enough to care—and you can support yourself enough through other means not to worry about sales figures constantly.

Greg - Is your book the type of story that you would allow your own children to read?

Matthew - When they’re old enough, sure. They just need to understand that the main character is not Daddy, and does not necessarily represent his outlook on. I think nearly any book can be a learning experience as long as it’s understood in context by discussing it.

Matthew - I’ll start writing positive stories about lovely things happening to people, because that’s likely where the book market will be then. My fiancé might need to help me with that, though. 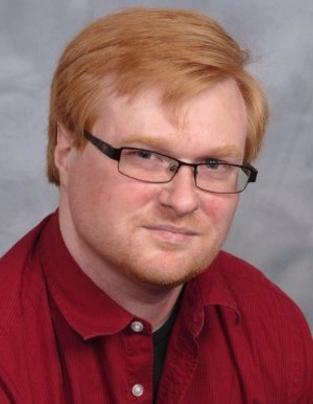