This week's guest is James Plumb 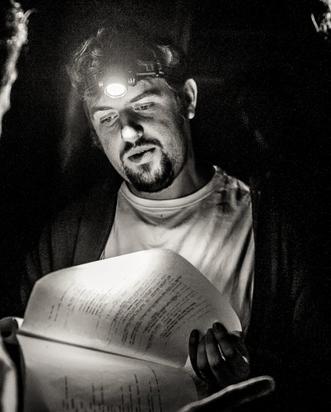 Your six-year-old daughter has been bitten by a zombie and now hungers for human flesh.

What do you do?

Do you double tap her in the brain?

Or do you become the ultimate enabler and feed her human flesh?

And where do you get human flesh from?

This is the dilemma that Gareth and Jen face with their beautiful daughter Ana.

What will they do?

And how far will it go?

James Plumb is the author of LITTLE MONSTER. He is the co-writer and director of “Night of the Living Dead: Resurrection”, “Silent Night, Bloody Night: The Homecoming” & “Kerb Crawlers”. His films have terrorised cinemas and supermarket shelves from Northern America, Germany to deepest, darkest Wales (where life is cheap!).

He is most interested in that territory where the ordinary meets the extraordinary and the two blur.

James - The credit – or blame, depending on your persuasion – must go to David Moody and Wayne Simmons of Infected Books. Due to pretty heavy health issues in my family, I had just decided to put film production on the backburner and focus on family and the day job for a few years. The very next day, Wayne got in contact to ask me if I’d be interested in contributing to Infected Books event Year of the Zombie, with a zombie novella released each month by a different author. I was honoured, flattered and terrified that David had thought of me. But I asked for 24 hours to think it over. I’d just decided to put one of my interests on hold, and here I was being asked to adopt a whole new one. Plus, I hadn’t written prose fiction since school, so was concerned I’d struggle there.

I got back in contact with Wayne and explained my concerns, but he and David had both been big supporters of my film work and had highlighted the character work in my films as a strength. So I agreed.

James - Living in South Wales means that landmarks are on my front door step and my backyard. But my favourite has got to be Tinkinswood, a Neolithic burial chamber near Barry. Its practically vibrating with history.

James - I usually have four or five books on the go. An unhealthy mix of non-fiction for research purpose (at the moment I’m on a speculative architecture kick) and fiction. Fiction wise, its pretty genre heavy: crime, sci-fi and horror. Just finished a double of Ed McBain stories from Hard Case Crime and moved onto Declare by Tim Powers, a MI5 meets Cthulu romp.

Greg - Is Little Monster the type of story that you would allow your own children to read?

James - Well seeing as its partly based on them…. Nah, I wouldn’t. I couldn’t afford the therapy bills.

James - Stoker.
Easy!
Sorry Bram, but the film adaptations of your work are better than the books themselves. I’m a King kid, grew up reading his stuff when I was way too young. And I love Lovecraft for the existential, cosmic headfucks.

James - Jake the Dog from Adventure Time, not for his zombie killing skills particularly. He just seems like a lot of fun to hang out with.

Greg - Where did you get the idea for Little Monster?

James - The initial idea came from my experiences of 2am visits to hospitals with my infant daughter, and the terror and the exhaustion that comes with spending days on end by her bedside, waiting for news and hoping to be allowed to go home. I’ve been lucky that the children’s ward that has almost become my summer home, is an excellent ward and the staff there are fantastic. But deep down that fear, that sleep-deprived, junk-food-fed fear is there…

James - This one’s a little embarrassing.

According to my parents, when I was a baby sitting in my bouncer watching Jaws with them I used to laugh and clap anytime the shark ate someone.

But I remember being terrified of John Carl Beuchler’s Troll. Its not a great film, but the possibility of my little sister being replaced by a troll and then trying to turn me into a shrub seemed a viable threat. Growing up in the midlands, about a hundred miles from the closest coast, meant that I didn’t have much to worry about in terms of shark attacks.

James - I’m going to throw myself to the zombie masses. If watching zombie films has taught me anything, its that the survivors have a pretty miserable existence. So bring it on!