​Greg – David, I have had the pleasure of reading three of your books, and a fourth (The Rack & Cue) on its way.  The first question that really pops into my mind is, does your mom know that you write this kind of stuff?

David - Does Mrs. Hughes know? Mum’s my biggest fan! When I lived with my parents, my mother was my toughest critic. Everything I wrote, Priscilla (my mum) would read and let me know exactly what she thought. Now, people will tell you not to give your work to friends or family to read, because they will tell you what you want to hear. Nope, not with my mother. Priscilla had no problem telling me that my work was ‘Crap’ or ‘Crap, try again’, as she thrust it into my chest. If I tried to protest, I would be met with a barrage of ‘You wanted my opinion, so I told you. It’s crap’. Harsh? Not at all. I loved her for it. Still do! Thanks to her, and a few others, I turned hours and hours of writing practice in.  My mother was an avid reader of Dean Koontz and Richard Laymon, so I have a lot to thank her for. She’s one cool lady.

David -Into Ty Schwamberger’s Deep Dark Woods… Great guy, great read – I highly recommend you check his stuff out. Not sure I’d like to be at that location, mind you, as something big, scary and fucking dangerous is lurking… Can’t I go to Disneyland instead? I love riding the tea cups! Not only that, Goofy promised me a suck-suck job if he and I ever hooked up again. Dirty beast, as he is. I have no idea what kind of man he thinks I am!

I seem to have got off topic. What were we talking about? Oh yeah, stop drinking my beer!

Greg - Over time, many books and stories disappear.  If only one of your stories could survive and be studied in five hundred years as an example of early twenty first century horror, which one would you want it to be?

David -I’d have to say Wind-Up Toy because it explores so many different avenues within the horror genre. Not only that, it crosses fields and bleeds into erotic. Some have dubbed this style ‘horrotica’. I like that. There’s also a lot of psychological aspects to the novel/characters, not to mention human emotion and connection. The novel really is a mixed bag of twenty-first century horror. What started as a sort of snub to Fifty Shades of Gray, turned into something else completely! I’ve said it before, and I will say it again – there’s so much of my own personality in Simone, the main character. Not just his personality, but other things too (not the killing bit, though). I won’t say too much – I’ll just leave that thought with you…

Greg - (Takes another drink of David's beer and shudders) The zombie apocalypse is upon us. Who is your fictional zombie-killing partner of choice (from television or the movies)?

David - What about games? If it was a game character it would either be Tomahawk (Street Fighter), Max (Streets of Rage 2) or Mike Hagger (Final Fight)… But been as it’s a character from either a movie or television programme I would have to say John Rambo (Rambo) or John Matrix (Commando). Having said that, Dutch (Predator) would probably be my first choice. After all, he is a crack commando and an alien killing machine! Yeah, let’s go with Dutch.

Greg - Tell me a little bit about your protagonist from The Rack & Cue.  Is it a James Bond type, never in any real danger – always able to get out of trouble and into the leading ladies’ pants?  Or more of the John Rambo type – skilled and deadly but with a heavy cross to bear?  Or perhaps Ripley (Alien) – a strong female who can take charge and kick butt when she needs
to?

David - Ha! I love this, especially as John Rambo is mentioned in the answer above. Honestly, I did not read this question before answering the previous. The main protagonist in The Rack and Cue is a truck driver by the name of Rigs (yes, the name is meant to be satirical), who works with his best mate Iain. They have their own haulage company and dream of one day having a fleet of trucks and drivers under their command. Rigs is a simplistic sort of fella, who is single and looking for love, but it will happen when it does – his job keeps him pretty occupied, as he spends most of his time either sleeping or driving. He’s a gently soul with a lively personality – he’s a loveable rogue without the rogue, however, he will stick to his guns and fight his way out of a hairy situation if push comes to shove. Basically, he’s a guy you’d want on your side in life! Oh, he’s also a Roy Orbison fan.

David - I don’t do much jumping, not at sixteen stone! I’m likely to slip a disc or pull something that don’t want pulling… As for filling my pants? I do that on a daily basis. What can I say? I love the mushy feeling beneath me. Hey! You brought it up, goddamn you.

Okay, with the worrying stuff/humour out of the way I’d have to say The Thing is my favourite horror movie. It also sits in my top three flicks of all-time, along with Big Trouble in Little China. If you don’t like either of these films then please allow me to get a ‘Fuck you’ in right now. Fuck you! I kid, but not really. No, seriously, I kid…

Favourite horror book would be In the Dark or Endless Night by Richard Laymon. But for scariest I’d have to say The Mailman by Bentley Little – that story set me on edge and my anus off twitching.

doorstep, or in my backyard, as you say. The attraction in question is a

castle by the name of Castell Coch (Red Castle). It’s sit on top of a mountain

and can be seen for miles. It’s a pretty breathtaking landmark and a very

eerie place to be around at night! The castle has a very rich history, which

should be checked out if you’re ever in the area. Below is a link to some

Greg – How old would you want your own children to be before allowing them to read your book?

David  - If it was up to me they could read my stuff whenever they pleased! I got started on horror when I was five-years-old and I turned out okay. Well, okay-ish… Saying that, I turned out to be a right fucking pervert, so it would probably be best if they came of age first! Yes, let’s go with that… Fifteen, sixteen. Why not? We were reading Shakespeare when we were in school and his stuff is full of sex, death and misery.

Greg - What would your family be found doing on a long weekend?  Would you be down by the lake, on the rollercoasters at a fun park, or relaxing in your own backyard?

David - All of the above! Since my little Ruby come along (six weeks old but more by the time this interview hits) we’ve been spending a lot of weekends out of the house: days at the local park(s) (playing with water pistols and other fuckery), soft play centres (if the weather is crap), or time spent at the seaside – my fiancée and I have been going out to the fair a lot lately; I love being around arcades and fairgrounds late at night – there’s just something about it. I like being out after dark in general. 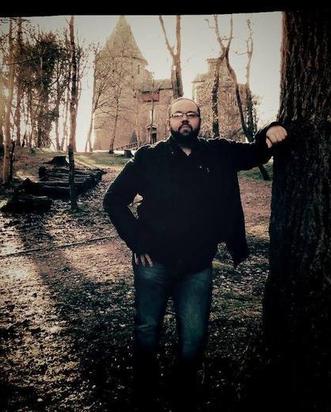 David Owain Hughes is a horror freak! He grew up on ninja, pirate and horror movies from the age of five, which helped rapidly install in him a vivid imagination. When he grows up, he wishes to be a serial killer with a part-time job in women’s lingerie…He’s had several short stories published in various online magazines and anthologies, along with articles, reviews and interviews. He’s written for This Is Horror, Blood Magazine and Horror Geeks Magazine. He’s the author of the popular novel “Walled In” (2014), along with his short story collections “White Walls and Straitjackets” (2015) and "Choice Cuts" (2015). After discovering Richard Laymon, David set out on a path to become the best writer he could, holding a BA and MA in creative writing.

A hellish storm forces an unwitting group of travelers to seek shelter from the road. After nearly giving themselves up for lost, each finds himself in front of the eerie pub called the Rack and Cue. The pub’s owner, Porky, welcomes them in with tasty beer, delicious homemade meat pies, and the promise of good entertainment - a pool tournament. It’s a winner-takes-all competition with a hefty cash prize. However, as each round wraps up, and each loser in turn mysteriously disappears down to the cellar, some of the guests become suspicious. One pair of truck drivers, Riggs and Iain, determine that their only hope is fighting their way out.