and all of the giveaway info

Hunter Shea is the product of a childhood weened on The Night Stalker, The Twilight Zone and In Search Of. He doesn’t just write about the paranormal – he actively seeks out the things that scare the hell out of people and experiences them for himself.

​Hunter is proud to be be one half of the Monster Men video podcast, along with his partner in crime, Jack Campisi. It is one of the most watched horror video podcasts in the world. Monster Men is a light hearted approach to dark subjects. Hunter and Jack explore real life hauntings, monsters, movies, books and everything under the horror sun. They often interview authors, cryptid and ghost hunters, directors and anyone else living in the horror lane.

Living with his wonderful family and two cats, he’s happy to be close enough to New York City to get Gray’s Papaya hotdogs when the craving hits. His daughters have also gotten the horror bug, assisting him with research, story ideas and illustrations that can be seen in magazines such as Dark Dossier. 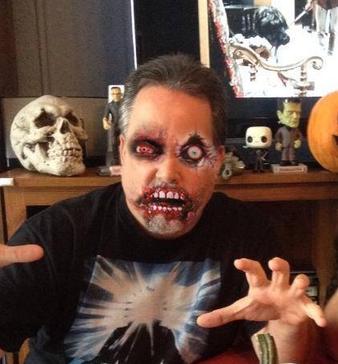 Okay, the question I’m here to tackle is why do I write about ghosts? The answer is simple : because they scare the ever loving crap out of me!

Unlike vampires, werewolves, zombies, monsters big and small, ghosts are real. Sure, we can quibble about that statement, but once you’ve seen one, come back to me and take the con side of the argument. I triple dog dare you.

As long as people have been dying and the living have been left behind to document strange sightings, ghosts and their chilling stories have been with us. Hell, I’m just a future ghost, spending my days in this meat suit, slaving away for a corporation by day and tapping away on my keyboard at night. The list of people I want to haunt grows each year.

People always ask writers where we get our inspiration. Part of the reason I like to dabble in ghost stories is because I’ve lived with one for over 20 years. Our little boy (we never gave him a name) just kind of pops up every now and then, looking as real and physical as my children. Yes, the first year he showed himself kept me on edge, but over time, we’ve come to think of him as a benevolent watcher.  So with him at my shoulder, I sat down and wrote my first horror novel, Forest of Shadows, about a man obsessed with ghosts and proof of an afterlife. That was a real stretch.

A few years later, I wanted to tell the tale of the mysterious child in my own house, but since my publisher only deals with fiction, I had to fold him into a what I feel is my most terrifying novella, The Waiting. Other books exploring life after death have followed. Because I truly believe in spirits and feel we need to devote serious scientific minds to the phenomena, the subject is the one that thrills me as much as it gives me shivers. And I’m not alone, judging by all the amazing people who’ve written to me wanting to share their own experiences or urging me to write more stories about hauntings.

Some of my favorite horror movies delve into the supernatural, from The Haunting to The Amityville Horror and The Entity. Jeez-a-loo, when my wife and I saw Paranormal Activity, we both had a hard time sleeping that night. Ha ha, scary ghost movies are a scream until you have to lay your head down knowing a real ghost is in the room with you. I just bought the Blu Ray and have yet to play it. Maybe during a nice, sunny day.

I’ve managed to cloak myself in a blanket of the paranormal over the years. Even my podcast tastes bend toward the ghostly, like Jim Harold’s Campfire Stories. Some of those true stories, recounted by the people who experienced them, give me the willies – and I’m a jaded old horror writer!

Of course, I gravitate toward supernatural horror novels like the insomnia-inducing Dark Inspiration by Russell James, The Sorrows by Jonathan Janz, Abram’s Bridge by Glenn Rolfe or Doppelganger by Sean Munger. And those are just a few from one of my publishers, all of them guaranteed to make you keep the lights on at night, circle the bed with salt and grip a crucifix.

It all comes down to this. If we all have the potential to end up ghosts walking the earth, seeing but not able to experience life the way we knew it to be, maybe we need to walk in their ethereal shoes while we’re here. And the best way to do that is through the experiences and imaginations of those who dare to face the unknown and share a shiver or two.

Sharing the scares. That’s exactly why I do it. What’s the point of being afraid if you go it alone?