Adam - I’ve had the pleasure of meeting David Moody (the head honcho of Infected Books and author of the Autumn series – very nice guy) and he was kind enough to invite me to contribute. It seemed like a superb idea. There are a bunch of superb horror writers around at the moment, a very rich and creative sub-culture, and the Year of the Zombie is a perfect sampler of their work.

Adam - Lovecraft and King (and James Herbert) were such pivotal parts of my childhood I couldn’t possibly wish them out of existence. They got me through some hard times as a kid. I was miserable at school and the pulp horror from the local newsstand was a crucial escape. Sorry, Bram.

Adam - I usually have a pile of research books kicking around. Homework rather than reading for pleasure. I seem to have amassed lots of US army manuals. (Top tip – all US federal documents such as army survival manuals are public domain so you can get them on pdf for free.) But recently while on my hols I read Ficciones by Jorge Luis Borges. I can’t recommend it enough. Each of his short stories is an exhilarating, labyrinthine conundrum.

Adam - Sci-fi/horror. I’m one of those kids who saw The Thing on VHS at a formative age and has never quite recovered. But, while sticking to those genre conventions, I’m trying to explore my own life a little. Each blood-splattered novel is a coded diary.

Adam - I live in the Cotswolds. The entire area is a local landmark. You can’t move for film crews. The Doctor Who crew often drive up from Cardiff and turn our local forests and cave systems into an alien world.

Adam - David Moody’s Autumn and Hater novels. Highly recommended. He has a wonderful clarity of style that reminds me of golden-era James Herbert. I’ve also got Rich Hawkins The Last Plague lined up on my Kindle.

Greg – From what I understand Killchain, your contribution to The Year of the Zombie, is set within the world of your Outpost series.  Can you tell us a little bit about that world?

Adam - There have been so many apocalyptic novels/films lately one doesn’t have to provide a wide-view of whatever pandemic one is trying to describe. Movies like 28 Days Later and World War Z have already filled one’s readership with images of societal collapse so one can skip those kind of scenes and zero-in on the dilemmas facing an individual protagonist. That’s my approach. I’m interested in the fate of folks on the periphery of a disaster. I’m not interested in the president and his advisers. I’m interested in little folk trying to figure out what’s going on and how to survive. And I’m interested in what those dilemmas reveal about human nature.

Adam - Lying in my cot and feeling a spider crawl through my hair.

Greg - You’ve got a gang coming over for a BBQ . Naturally, you wait until 10 minutes before closing to get your meat. All they have left is ground turkey (burgers), lamb chops, or tofu sausages…what do you bring home?

Adam - Turkey burgers. Once you’ve slapped some relish and pickle on those bad boys, no one will know the difference.

​Adam - I’ll probably wing it. For the past few years ‘survivalists’ have been rebranding themselves as benign ‘preppers’ and emphasising the value of homesteading and local currencies rather than simply stockpiling assault rifles and ammo. But lately the subculture has reverted to its gun-nut origins and readying oneself for hard times seems to involve little more than acquiring an AR-15. Yet what good would a gun have been during the Japanese tsunami, the recent Italian earthquake or a Pacific typhoon? (Admittedly a firearm might have been handy during the Hurricane Katrina horrors in New Orleans, however I would suggest the anarchy of that particular situation was the result of local poverty and systemic local/federal incompetence rather than a general dog-eat-dog aspect of human nature.) We are led to believe, by those of an authoritarian mindset, that humans are innately savage and, in a disrupted situation, will go all Lord of the Flies at the drop of the hat. In fact history suggests otherwise there are plenty of examples of disaster-hit populations working in a rational and compassionate way to help friends and neighbours. The aftermath of the Japanese tsunami would be a prime example. (Rebecca Solnit as written a superb book on this very subject called A Paradise Built in Hell. Check it out. It’s a fascinating read.)

This week's guest is Adam Baker 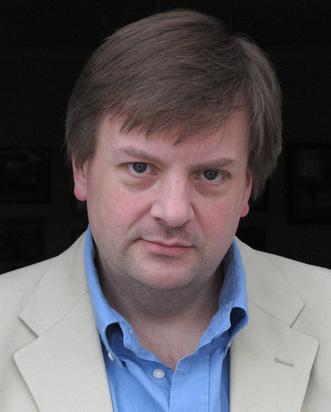 Adam Baker was born in the west of England in 1969. He is the son of a priest. He studied Theology and Philosophy in London. He has worked as a gravedigger, a mortuary attendant, a short order cook in a New York diner, and fixed slot machines in an Atlantic City casino. He is currently employed as a cinema projectionist.

Elize arrives in Mogadishu with instructions to assassinate a Russian embassy official. She has tactical command of a US kill-team, CIA operatives, rookies and veterans of a dozen war zones. It should be a straightforward hit but her luck is about to run out. She will soon find herself trapped in a city gone to hell, struggling to complete her mission in the face of betrayal, a spreading pandemic and a population hungry for flesh…

Set within the same world as Baker's bestselling OUTPOST, JUGGERNAUT, TERMINUS and IMPACT, KILLCHAIN will appeal to fans of zombie horror and high-octane thrillers.
​