I was born in Salt Lake City, Utah (one of those landlocked wide-open states in the western U.S.). I’ve always been a reader and my mother is quick to add, I’ve always been a writer. I spent a decade as a bartender where I saw both the ups and the downs of human nature. Once upon a time, I envisioned myself a history professor. Alas, life had other plans and I’ve still lived happily ever after. I write and read and work outside as much as time and weather allows. I try not to trip over Bismarck, my devoted German shepherd. I love watching baseball, and relish each and every game the Pittsburgh Pirates play. My first book, Hope 239was released in 2015. This is book one in a series centered on an interstellar generational arkship which after 239 years as at last reached its destination. The Bland Eating the Bland and Other Beginnings, is my first story collection. For 2016, I’m writing Hope 240 and finishing my zompoc blog-serial Promised Land Abandoned. I’ve several new releases in the works, including another story collection and a 4-part lit-novel titled The House on Lake Tacit, of which the story “Rushton” and his character are integral parts.

This week's guest is Jeffrey Goff 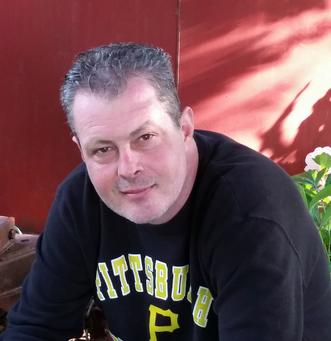 Greg - In a short story collection, I’ve always thought that it is essential to grab the reader’s attention and set the pace with the first story.  How did you decide which story to use to kick-off The Bland Eating the Bland and Other Beginnings?

Jeffrey - On my initial go-round I actually had “The Longest War” as the first story, which made the collection’s title The Longest War and Other Beginnings. But I’d received a few favorable comments on the title of “The Bland Eating the Bland” so I elected to use it as the lead story, and hence the main part of the title for the collection. In retrospect, “Bland” made for a better lead story as it’s dialogue heavy (Cliff and Henderson talk about many things as they attempt to ignore what is going on outside the garage), and I felt it set the Twilight Zonish tone for the stories that follow.

Jeffrey - Having grown up near a cemetery with only an abandoned house in between, I’d plenty of moments as a kind to be terrified. Not surprisingly, my first zombie movie scared me to the point I couldn’t sleep for several days. I was probably about ten years old at the time. I’ve since re-watched that first zombie flick and, of course, now it is a source of never-ending self-deprecating humor. I’m even a bit embarrassed to name that old film, but, you know, things we did as kids should be memories of amusement and not judgements. So, the movie was…“Children Shouldn’t Play With Dead Things.” Even today the end scene still gets me.

Jeffrey - Patricia Tallman’s Barbra from the Savini re-make of “Night of the Living Dead.” If a female is going to go all Ripley of the living dead, then I want her on my side.

Jeffrey - Hahaha, this question is almost unanswerable. I read everything I can get my hands on. On my Kindle, I’ve an informal rotation: zompoc, horror, dystopian, sci-fi, fantasy, lit-fiction, and then whatever happens to be the oldest unread book or story in the library. Sometimes, since it’s informal and I like to be spontaneous, I will double or triple up on a particular genre. If I’m in a specific mood, I might read two or three zompocs in a row, or whatever strikes me at a given moment. And I’m always reading a traditional (aka paper) book at bedtime. Right now that book happens to be The Day of Battle by Richard Atkinson about the allied invasions of Sicily and Italy during World War II. See, I read everything I can.

Jeffrey - Ghost of Red Beard. I love pirates, what can I say?

Jeffrey - Hmmm, not an easy question. So many books, so many movies. Lovecraft gave me nightmares, specifically “The Horror at Red Hook.” But King has also done that a few times, “The Mist” and the short story “Grandma” still freak me out. But to pick just one, book or film…I’d have to say John Carpenter’s “The Thing.” Desolation, in the company of a mimicking, angry alien is a frightening scenario, throw in Wilford Brimley and it becomes positively terrifying.

Jeffrey - The last paper book I read was The Chronicles of Narnia. The last Kindle was The Otherworld Rebellion by AD Bloom. So I’m either surrounded by talking animals and English-accented kids or allied with alien bugs and clams on a remote planet.’

Jeffrey - No music, I get too distracted. Absolute quiet isn’t necessary. I prefer to write outside on the patio, where I can watch and listen to the world going about its normal activities. But if I listen to music my mind goes wandering all over the place.

Greg - Over time, many books and stories disappear.  If only one story from The Bland Eating the Bland …and Other Beginnings could survive and be studied in five hundred years as an example of early twenty first century horror, which one would you want it to be?

Jeffrey - The last story, “Rushton.” He’s a special character to me. But it isn’t true horror, though it does have some paranormal elements, so that doesn’t answer the question. In fact, it is a difficult question, as my stories are more akin to the Twilight Zone than to pure horror. As such, if only one story of mine survives, I hope “Rushton” will be the one.

Jeffrey - I’m a winger. Always have been. Me and planning are not on friendly terms. Though I have written about sitting on the roof with a bowl of popcorn and a 12 pack of beer and watching the apocalypse in Technicolor splendor. But that’s just fiction, and fiction isn’t real, or so I’ve been told.

The Bland Eating The Bland And Other Beginnings

really big non-problem will go away, all on its

They may wander, but they are always there.

Waiting outside the garage, or down the dark,

BEGINNINGS . . . Stories of life and death,

choices and repercussions, questions without

answers, existence in nothing. From zombies, to aliens, to obsessions, to self-awareness, to encounters, to walks in the park, these 11 tales range from the middle of the North Atlantic to distant planets, from the 50’s to nearby futures, from sweeping open skies to confined darkness, come along for the ride. And don’t ever be afraid to ask: What was that?